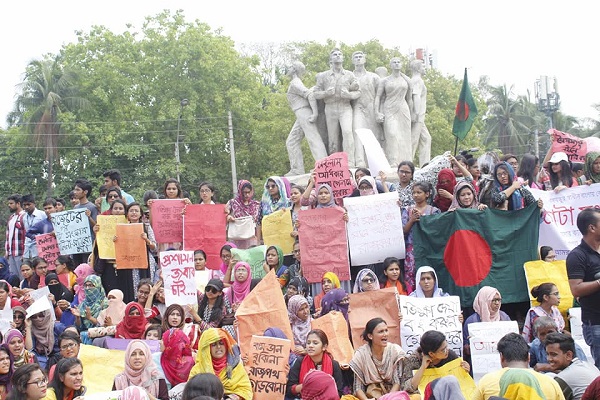 Yes. Surely it was a savage move on part of Bangladesh Chattra League (BCL) activists to break the right knee and backbone of Toriqul Islam, a leader of quota reform movement on the Rajshahi University campus on July 2, with a hammer. The whole nation was shocked at the X-Ray image of a battered Toriqul and both the photo and video of beating him up ruthlessly became viral on social network. More disquieting is the news of his forced release from Rajshahi Medical College Hospital (RMCH) before a complete treatment.

We feel restless at the image of mother of Rashed Khan, leader of quota reform movement, in tears to “forgive” her son after he was taken on remand for 13 days in two phases. The country felt outraged when social network became viral with the image of a female student cordoned by a number of BCL male activists while she was trying to save a fellow comrade of the movement. We feel suffocated when we see a handful of female students cum activists like Lucky Akhter and others from different left organizations are severely abused with all sorts of sexist and pornographic ill comments by BCL memebrs.

We must extend our sympathy and support to all the injured male students and all the sexually harassed female students (either in real or virtual sphere). But still there may be some questions regarding the quota reform movement which we aptly describe bellow:

Rumor 1
It is often told that hundred and thousands of persons have obtained “fake freedom fighter” certificates and that their offspring will get the quota opportunity in government services under the pretext of those fake certificates. 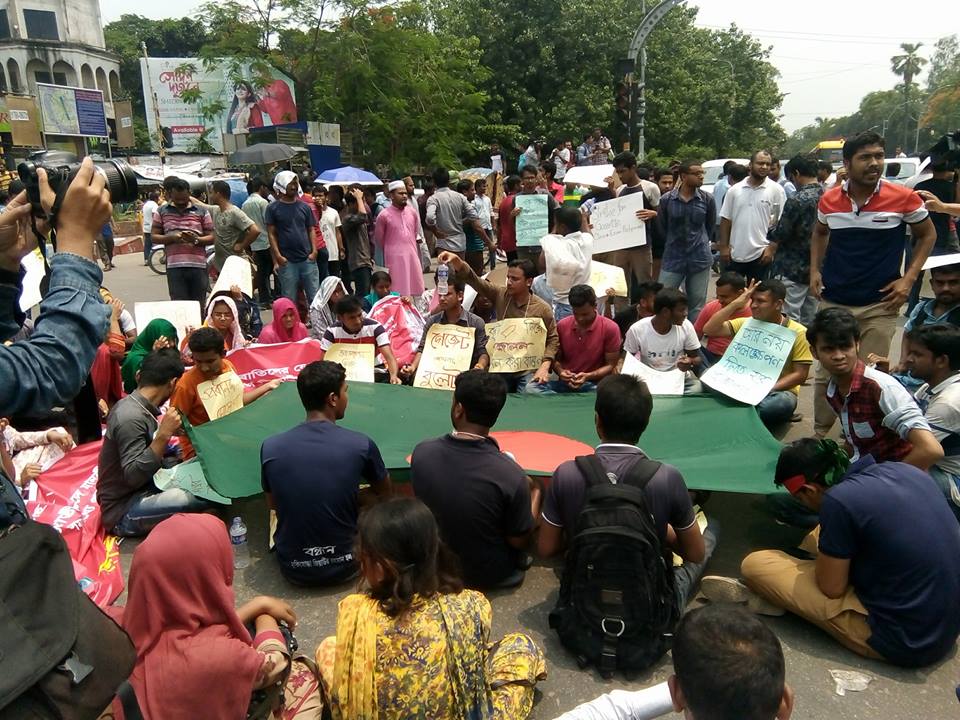 Reality
Only 13,000 freedom fighters’ certificates were distributed after Awami League came to power of which 6,000 were later cancelled as “fake” certificates and those with fake certificates were also dismissed from their jobs. Later the entire process of awarding freedom fighter certificates has been halted since 2013 although hundred and thousands of applications were being filed. Most of those applicants were fake and the media covered this news by and large. But never it is mentioned that the entire process of awarding new certificates has been stopped since 2013. Nobody even acknowledges that this government has identified the issue of these “fake applications.” The government endeavor to prepare database of the freedom fighters and the process of online verification too is not mentioned anywhere. Rather the BNP-Jamat propaganda about the “fake freedom fighters” got huge popularity and general students got enraged upon hearing this rumor.

So, it’s crystal clear that the “news” of hundreds and thousands of “fake freedom fighters” got certificates is a blatant lie and nothing but mere rumor. But this rumor has become a pertinent tool in the anti-quota movement. All on a sudden the leaders from Bangladesh Chattra Shibir (BCS) began chanting name of Father of the Nation Bangabandhu Sheikh Mujibur Rahman and singing the song of pro-71 patriotism. They, in addition, called on against the “hundreds and thousands of fake freedom fighters” from under the banner of anti-quota movement. But the general students, as enraged they have become, did not have sufficient time to probe into the real facts and began considering this movement as a pro-Liberation movement as the “fake freedom fighters” should be just as much stigmatized as the Rajakars (war collaborators). So just imagine that how successfully the Shibir leaders could channelize the general students’ sentiment to utterly a wrong direction and hugely benefited from it!

Reality
While manufacturing this propaganda of “56% quota” and “44% merit,” it was simply omitted that each and every Bangladeshi citizen who is contesting for a position in the BCS, is included under the district wise quota system. Nowhere it was told that when a freedom fighter’s offspring gets a government job, he fills up the quota of both the freedom fighter’s quota as well as the district quota. It is the same way that when a woman gets a chance in the BCS exam, she fills up both the “quota for women” and “district quota.” Thus each category of quota over-laps with the other and thus the real implementation of the quota system comes down just 25-30% of all the allotted quotas. Thus the reality of 65-75% quota is being simply ignored or overlooked. 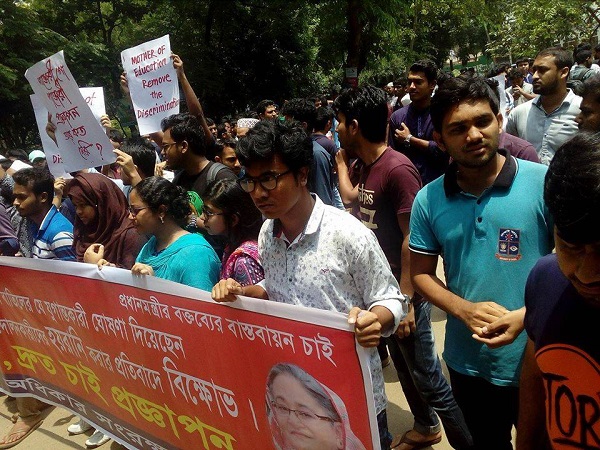 But the Chattra Shibir leaders became successful in manufacturing another rumor and the general students did not inquire into the “mathematics” of the quota system and waged their days and nights in the movement. If the general students could know the real fact that only 25-30% quotas get really implemented, possibly they did not invest their time and passion in the movement.

Rumour 3
Unemployment is sky rocketing due to long tenured vacancies in the “zero chairs” under the quota system.

Reality
The zero chairs are generally filled up from the candidates under merit criterion. Meantime, State Minister Tarana Halim straightly cancelled this rumor by articulating the exact notification number of replacing the “zero chairs” with candidates belonging to the criterion of merit. Still the baseless rumor was well fed to “accelerate” the movement.

Rumour 4
Those having the “benefit” of freedom fighters’ quota are getting jobs just by obtaining mere 33% of marks in the BCS exam while the “meritorious” students are not getting a government job even if they secure 80% of marks.

Reality
The final list of merit is prepared in the BCS examination only after a candidate successfully passes all the three layers of the Public Services Commission (P.S.C). Those layers are preliminary, written and viva. There is no quota system even in the viva exam and nobody can pass it unless she/he obtains at least 50% marks in the viva. The final list comprises numbers of both the written and viva exams of a candidate.

Thus the quota system is used only for first 2-3,000 of 4,00,00 examinees. Then how can you term anybody “meritless” who has been selected within first 2-3,000 of 4,00,000 examinees? What is more important that those who will be recruited under quota, probably could secure an appointment even without quota. We mean the reduction of 56% quota down to 25-30% for inter section reflects that there’s a common population percentage within the “quota receivers” who could get the job without quota. If we esteem the percentage only up to 5-10% of quota, then the entire gamut of quota seems to be just around 20%. Can a movement be launched against only 20% quota? 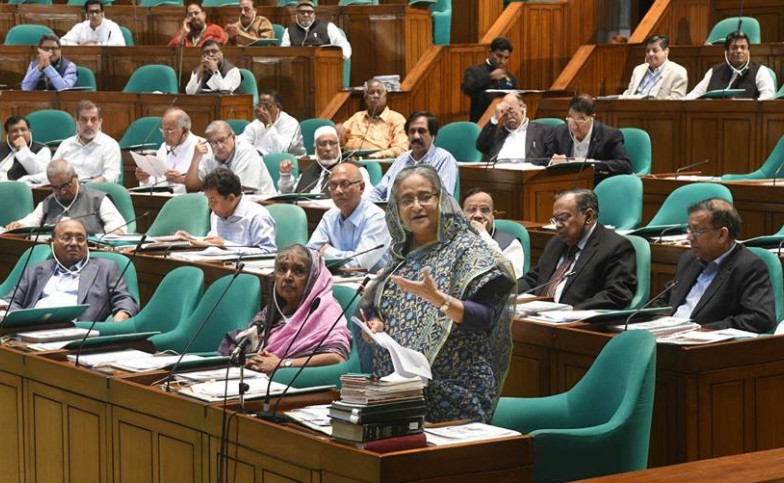 Another very important thing is that the implementation of quota does not apply to the cadre services job. Those who passing in written but not in viva get the government job in non-cadre services. May be they are not getting the job in the cadre services but they are getting a government job. Thus everybody in the merit list is getting a job. It’s really unfortunate that how the “stories” of `33%” and “80%” is being manufactured in the movement. Can we support it?

Rumour 5
Nowhere in the world there is any such quota.

Reality
Every civilized state in the world offers a number of state honor and privileges to the war veterans. Moreover, there is the diversified quota system prevailing in a number of countries from Japan to Canada. In our neighboring state India this percentage of quota for the war veterans range up to 60-70% while it is as high as 92.7% in Pakistan. So can we support this movement even in global comparison?

When it first commenced?
This movement had its first outburst soon after the verdict of war criminal Golam Azam was declared. Chattra Shibir appeared in the field with an anti-government agenda and a heinous slogan like “Muktijodhdhar dui gal e/juta maro tal e tal e (Slap with sandals on both the checks of the freedom fighters).” Shibir activists even dared to change the fiery names like “Shahbagh Chattar (Shahbagh Square), “Gono Jagoran Manch” or “Prajanma Chattar (Generation Square)” and replace the names by using the epithet “Medha Chattar (Merit Square).”

It was the very beginning- beginning of a journey against the basic tenets of our Liberation War and on behalf of the war criminals. Our police, however, instantly dismissed the movement by lathi charge. But with rapid enhancement of scores of opportunities in the government jobs, general students began getting crazy for the “golden deer of government job.” This craving of general students for government job have been shrewdly manipulated by the Chattra Shibir and they have become successful to draw even progressive left students under the banner of this movement.

This year they were smarter and rather than chanting anti-freedom fighters’ slogan, they have used some “clever” slogans using the name of even Bangabandhu Sheikh Mujibur Rahman. Still we feel puzzled seeing the image of a student in the movement with paintings on her face that say: “Ami Razakar (I am a war collaborator).” Number of students have manifested banners, head bands or festoons claiming “Ami Razakar (I am Razakar).” Okay, we may agree that they have done it from some basic feelings of grievances, but can anybody claim “I am a Nazi” in Germany?

During the first outburst of this movement in March we have seen how rumors have been successfully designed like “killing” of students in “secret custody.” But later that student was seen to tweet. The government, on the other hand, made a number of mistakes. If the PM had declared that there will be no quota, why the gazette notification came too late? Again the agitators of the movement could wait a little for the notification. Now the PM mentioned that the “freedom fighters’ quota” will not be cancelled due to court’s order. So it’s a very confusing situation for us.

Remember that the 21 years’ long BNP-Jamat-JP backed regimes from 1975-96 when freedom fighters were the most neglected and hated “creatures” in this land! No, me too do not support the idea of “30% quota” for the freedom fighter’s families but cannot we leave at least 5% quota for them? District quota, however, today seems utterly illogical as the entire Bangladesh now enjoys a speedy roads and highway services as well as internet expansion. Five percent quota for the indigenous people, five percent for women and five percent for the disable coupled with five percent quota for the freedom fighter families can really brighten up our face to the global community that how balanced and humane is our quota system! Entire gamut of quota system will not exceed 20% percent in that case. 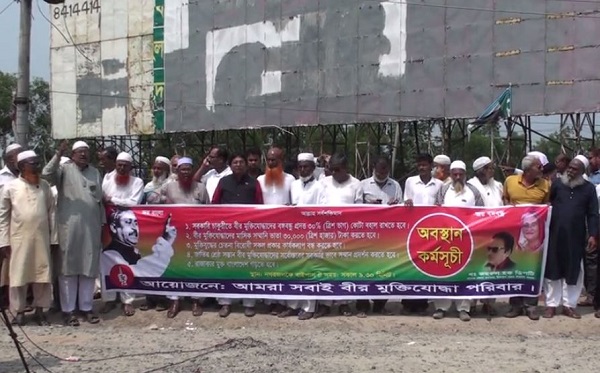 Last words
Though we extend our solidarity and sympathy to all the battered, injured and sexually harassed male and female student activists and leaders of this movement and utterly condemn the BCL crackdown on them, equally we urge the activists of this movement to become a little respectful to the “freedom fighters” or real heroes of our land. We condemn the BCL men’s sexually violent and pornographic comments on facebook walls of renowned activist like Lucky Akhter and others. On the other hand, some left female activist too has posed very derogatory comments on social network about PM Sheikh Hasina, explicit with sexually abusive connotation. Some left activists have already used the social network in a very derogatory and abusive manner to anybody not agreeing to their stance for 100 percent.

The most important thing is government job is only 2 to 3 percent of our total employment sector. Today is the era of globalization. Lots of Indian, Sri Lankans and westerners are grabbing the best jobs in our country due to their English, IT and other basic expertise where we lag far behind. Why the today’s young men and women of Bangladesh will not dream of working in a far better and competitive global sector? How long we will make a mountain of a molehill rather than being constructive and respectful to the best sons and daughters of our soil, i.e., the freedom fighters?

The government should open the discussion floor rather than adhering to stern crackdown stance and only reasonable negotiation can solve the crisis. Also we raise our demands for proper punishment of all those who have injured and sexually harassed others.